Well, the summer begins, and for us it's actually the end of con season until September. Unfortunately, due to a back injury, we're going to have to cancel our next few con trips, so Dallas Fan Expo and Denver Comicon are out of our rotation this year. It's a huge bummer but Danielle really needs some time to heal and with all the other cons and family trips we've taken this year she definitely needs a break anyway.

Anyway, we're still on for Rose City in September, but in the mean time we're going to be taking a little hiatus from appearances while we get all our stuff figured out.

Thanks for all your thoughts and prayers, and we look forward to seeing you all in person again soon!

Hey everyone! Hope things are going well with you. So, here's some kinda not great news: we're going to be taking a hiatus from updating our webcomics until after Jet City Con, returning on Nov 10. The short explanation is medical reasons. The long one is that Danielle has been struggling with back problems for the last... many years, and is having another flare-up that seems to be different. Because it's lower back pain, it makes it hard to sit in the same position for the hours it takes for her to draw pages. We're hoping this will resolve itself, but we'll be seeing some doctors to try and figure out the root cause. Please be patient with us as we work out what's going on and try to get her back to 100%. Thanks for all your support!

As you can see, we have launched our new experience! It is now easier than ever to seee the content we've created on various different websites. Starting this week, you'll begin to see weekly updates of all three comics, including the newly Odd19-branded Meticulous Failure, our previous webcomic Limited Immunity, and our newly webcomic-formatted Sin of Omniscience.

Coming soon, we'll be launching a variety of campaigns for you to donate money if you find value in what we do. We'll do our best to avoid advertising, but for now we're using a nice low-cost hosting solution so we don't need it... yet. So enjoy all the free content, and feel free to share it with your friends!

We're a pretty new company, and honestly this is our first attempt to self-publish, so we've learned a lot of things along the way. We've changed our creative process multiple times to make things faster without sacrificing quality. We've tried hiring contractors for steps of the creative process. We've changed vendors to get higher quality books in a faster timeframe. We've begun selling our books through digital channels.

And most recently, we've discovered a few things.

So, we spent a long time trying to figure out how to make this information work for us. We really wanted to get feedback, and the biggest feedback we got was that people really wanted to read our stuff and they really wanted it sooner than later. In some cases, people were very interested in what we had to say, they got it illegally.

Well, to fit all these goals, we've decided to convert Sin of Omniscience into a web comic. We'll still be selling the "books" as physical collections, and we'll be providing a different cover to any reprints so that if you've purchased our books, they're now one of an original set and will never be re-printed in that fashion. Starting September 1st, we will be posting new free pages of Sin of Omniscience on our website.

We feel like this is the best way to get the story out to our readers and fans, and still have products to sell through our site and at conventions. We'll be providing a new page of free SoO content on our site once a week. Because of the new processes we're using, we're also going to have time to update Limited Immunity once a week.

Watch this space on Sept 1st for a brand new experience!

Creativity - The Best and Worst Thing Ever

In an attempt to be as scientific as possible about one of the least scientific, infuriatingly dumb parts of my daily life, I'm going to present a pretty bogus, biased, and untested theory.

The Two Axes of Creativity

Anyone who's ever had to write a report, or draw a picture for art class, or do anything vaguely creative has realized two things. They either wanted to do the thing or didn't, and they were either good at doing the thing or not. With that in mind here is a nice visual aid. 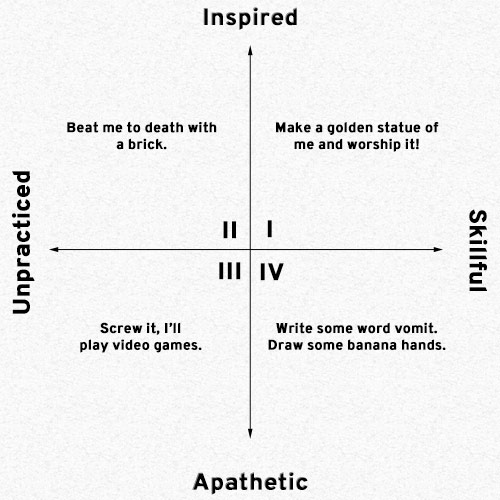 As you can see, I've conveniently labeled the quadrants for you. As I remember from high school algebra, the four chunks of a two-axis graph are numbered this way by convention. I've somewhat accidentally placed my labels on the graph to rank these from I (the state in which I spend the least time) to IV (the state in which I spend the most time). This may or may not be true for other creative people. I've warned you: this is a bogus, biased, and untested theory. So let's pretend to be thorough.

Quadrant One: I am a Golden God

As evidenced by the position, this is by far the least common state of mind. When it happens, you know. You can create whatever you want, and you want to create everything. You are in THE ZONE. Nothing can stop you, because your confidence is being proven every step of the way. This is also a very dangerous state to be in: you have a great chance of thinking what you're creating is good just because you're in the right mood. When your taste and ability to judge art increases (much faster than your ability to create it), you find yourself in quadrant two.

I thank the muses, gods of creativity, angels, and inanimate objects around me that I spend very little time here. Not as little as I'd like.

This is pure torture. All you want to do is create. You try, and you fail. Then you try again, and you fail harder because now you're more aware of how much you suck. You try to go do something else, like play a video game, watch a movie, or read a book. But every bad guy you slay, every line of dialogue, every metaphor you read stabs you in the heart with the bluntness of a rusty butter knife. You don't want to consume: you want to create. There are many medicines for this state, but I would not recommend any of them. Hemmingway drank. Warhol did drugs. I usually go for a walk.

Okay, so maybe the last one is okay, but in this state of mind you are severely likely to walk into a manhole, so be careful. All you want to do at this point is shut your brain off long enough to enjoy what you used to love.

Quadrant Three: Those Who Can't Create Get Wasted and Play

This is my third most common state. I spend a ton of time here, and for good reason. The reason I ended up creating things in the first place is that I loved art, music, writing, and digital stuff so much I wanted to make my own versions. This, believe it or not, is actually a pretty good place to be. You're enjoying the world, and you're letting your mind relax. You're being something honest and real: yourself. But you can't do this forever. It's not exactly that clear what you need to do with your life in this state: but it's realy easy to just not care.

Let me be clear: You really should spend some time here, because it's the only way a creative person can really charge their batteries. The first advice you'll hear from any writer if you ask them how to start writing is to read. Really go out and live your life, but how can you be a good musician if you never listen to music? How can you be a good writer if you don't even know who the formitive writers of your era are? You HAVE to find out. But then, you have to move on and make stuff. Even if it sucks.

Quadrant Four: Screw It, We'll Do It Live

As a creative person, you want to spend as much time as you can creating. You can't always control how inspired you are, and if it's any consolation, you're not the only one. But this is like anything else: you have to just keep trying. You may not always have that weird mystical spark that you always want: but you can control how much effort you put in. You can always control how hard you push yourself to do something.

As you can see, I spend the most time here. This means I'm fully aware that there are flaws in what I'm doing, and I'm not in love with it. But I have to teach myself to care less about that than I do about getting it done. I like to say it's the only path forward. Maybe it's just my only path forward.

But hey, I promised you bogus, biased, and untested. That sums up what I do, but enough people like it I keep trying. You can too.